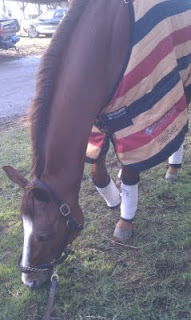 Simon gets the title today being that I'm typing away while waiting for the farrier to reset a shoe of his that has twisted a bit. He's a princess and couldn't possibility have anything that isn't just so. Long story short, he deserves to be one tonight. I did go a slow being that the ground was quite soft, and its not worth hurting him for today. He's got a very bright future ahead of him.

Describing the going as wet is an understatement. It was rather like galloping through a swamp earlier in the morning for RO. More on that later. Simon jumped around his first ** like he'd seen countless ones before. Pretty exciting being that this is effectively his 3rd intermediate. He moved up one spot to 10th.

Back to Running Order. Shipping over to the advanced side is a surreal process. Your half expecting the trade fair, dog agility, all the roping and signage present in the fall. Of course none of it is there. The weather was much like fall of '08 at his first 2* but a touch warmer and less rain. What was the same was the mud. It was quite deep. I didn't press him for time. It's always a challenge to find good ground in the galloping lanes as well as take off and landings on days like this. He jumped very well and finished up winning the division.

Socks started the day with his dressage. He was quite good especially considering that the best footing for warm-up was actually the dirt road heading back to the barns. He got a 28 and was in 3rd. This was his best score to date. He also finished up the day with show jumping. He managed to jump very well, but did have one rail. Unfortunately falling down to 5th. Still pretty damn good for his third training.

Beau finished up the day with his cross country. He was wild in warm-up. Started off the course very strong. He managed to jump well but the footing did take its toll. He was quite tired by the end. He finished up in 7th.

Jogs and show jumping tomorrow except for socks who is over at XC.