Posted by DPEquestrian at 9:43 PM No comments: 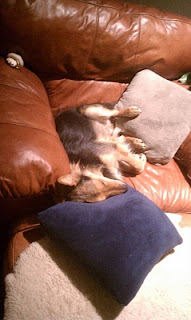 Posted by DPEquestrian at 10:15 PM No comments:

I've got to say it's a relief this weekend is over! Mark Phillips and I spoke a bit at the AEC's regarding a grant from the USET to head to the Boekelo CCI*** in the NED. Of course it's an opportunity you dream of, and couldn't turn down. The only stipulation was that I "didn't stand on my head at the 2nd fence..." So while this weekend wasn't my best performance, I managed to stay right side up! :)

I did have a small case of heart failure early last week. I got on RO on Monday, and he just didn't feel right. He was a bit sort in his right hind. Positive to hoof testers...and yes you guessed it an abscess. Which under normal circumstances would be complete relief, but in this case not so much. I couldn't stand on my head..but I certainly had to give it a go to head to Holland. So the race was on to get it all sorted by jogs on Thursday. Special thanks to Sudie, our faithful farrier (pictured below), Greg (our vet), Meg and Mollie at the barn for all of their collective work. So Thursday rolls around, and RO is looking great! Game on...but I wouldn't say soaking feet is the the ideal prep for a ***...

Dressage was not bad, esp considering we hadn't had a legit flat school in 2 weeks. RO finished dressage tied for 4th. XC was next. The course looked good overall, but had a few questions that were more difficult than anything he'd seen. We got on course, things were going quiet well. I made the critical mistake about mid course. We had an angled table line that was set as a road crossing. The first was a log jump, down a steep hill across the bottom then up the other side for an angled table then 2 strides to another opposite angled table. I had decided on 4 strides between the first two elements. I was not careful enough jumping in to get the type of jump I wanted...soft and quiet...He jumped in bold, bold enough to go for the 3 but I didn't listen to my instinct to soften and kick for the 3...held for the 4 and got the 3.5. So frustrating!!! Things happen, but I'd like to think I'm better than being careless in setting the exercise up. I can assure you, it won't happen again!! I did have on other fence 2 after the stop that was less than ideal, but that wake up call did the trick. The remainder of the course got better and better.

SJ on Sunday was quite good, he had 1 rail down. I was very pleased with the effort though...off to Holland!! We fly out Oct 9th and return on the 18th.

Tali did the CIC* this weekend. I was curious to see how he'd handle back to back weekends. It's not something generally done...but scheduling this year was awkward. I really didn't want to bring the same horse to Richland (MI) and the AEC's in Ga. I really didn't think that'd be fair on them. Each of those trips was roughly 15 hrs. So Tali's last run prior to the AEC's was Millbrook in Aug. He handled the quick turn around very well. He had a light week of prep...he was actually a bit more up in the dressage than I'd have liked. He finished in 3rd. He was great on XC, I didn't really push much for time, of course I wanted to make it, but I let him choose the pace wherever possible. We finished 4 sec over...not enough to change placings. He jumped great in SJ, finishing with a clean round and finished the competition in 2nd!

Slick also made the trip to Plantation. He did his first prelim here...I couldn't have been happier with him. His dressage is getting better and better. He's just very green. He jumped around a difficult track with ease...and show jumped well with 1 rail down. I think he finished 10th or so...not bad for his first time out!

The upcoming week has us taking a trip to Brendon Furlong's vet clinic for RO's final vet approval, we'll also be heading to Hunter farms for the Princeton Show jumping show with Courage. He might end up doing his and my first GP on the weekend. We'll see...playing it by year.

Check back for results...


Posted by DPEquestrian at 9:16 PM No comments:

SueD with the ponies... 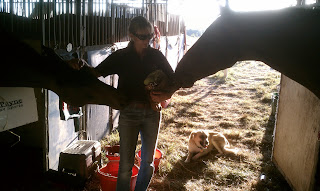 Posted by DPEquestrian at 6:31 PM No comments: 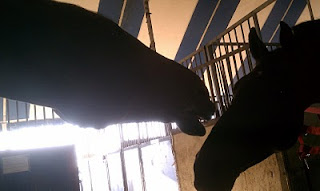 Posted by DPEquestrian at 5:51 PM No comments:

Things do seem to happen quickly!

Last weekend we had the AEC's where you might know by now that Tali ended up winning the Prelim Horse division of 60+ horses. He finished on an astounding 24 (76% dressage score). I couldn't be happier with him, and also for Larry and Amelia Ross who this spring bought a half share of him. Without their support none of this could have happened...I can't wait to see what the future holds.

I was looking through old video, and was shocked again about how far he's come. I stuck a short video comparison together, contained in it are two clips. The first is of Tali's first show in Feb of 2009 and the second from last weekend's win at the AEC's. Pretty incredible. I can't imagine what another 18 months will bring! Click on the video below for a larger view...it can also be played in HD.

Holland here we come?!?! I was notified by the USET that I was going to receive a grant to compete at the Boekelo CCI*** with Running Order. This is something that you only dream of...but it's coming true. Hopefully, it will be the first of countless trips abroad. All of this is contingent on a good run this coming weekend at the Plantation CIC***.

So Monday rolls around. I pick up a trot...and you guessed it. Running Order isn't feeling right. @#$%!!! Thankfully, long story short he popped an abscess out of his RH. Weird especially being that it's been 3 weeks from his last shoeing. That is horses though! So with less than ideal prep, Plantation here we come!

Tali and Slick are also going...Tali for the CIC* and Slick for his first prelim. Tali has had a busy week, scheduling again not ideal. Ideally he wouldn't be going back to back, but he hasn't run since Millbrook 5 weeks ago and won't again until Morven 3 weeks from now.

Check back for this weekends updates...it's going to be interesting...nerve racking...who knows...hopefully we can pull off another win or two!

Posted by DPEquestrian at 9:34 PM No comments:

Details coming soon, but I figured I'd get Tali's video up and running! We have XC and SJ coming within the next few weeks, but dressage is below:

Posted by DPEquestrian at 7:07 AM No comments: 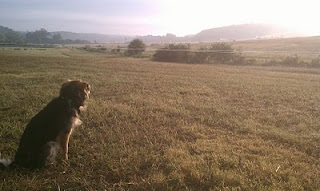 Posted by DPEquestrian at 8:18 AM No comments:

Click to view Courage's jumping round.
Posted by DPEquestrian at 7:30 PM No comments:

Click for the Helmet Cam footage of Richland Park CIC***'s XC on Running Order.
Posted by DPEquestrian at 5:52 PM No comments: