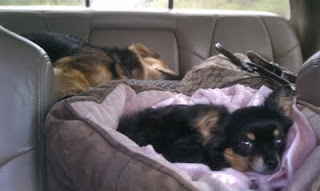 We got lucky here today. Unlike Plantation the rain held off until after the day was finished. All of the horses were quite good but fresh. Couldn't blame them being that is was in the high 40's all day. Running Order started the day off. His trot work was not his best but was quite good in the canter. Changes were better than they've been in the past. He finished up in 4th.

We fit Socks in before Simon. He doesn't start until tomorrow. I tried a new warmup plan with  Simon who is historically quite hot. I was on an hour before our test. He was great...will be even better next time. We'll go for 1:15 next time. He finished up with a 57. I'm not sure what place he's in, but its a huge step in the right direction.

Beau was last to go. He was very good today. He had his best score to date sitting on a 30. Also not sure what place but its got to be pretty close to the lead.

We finished up the day walking the courses for tomorrow. The Advanced looks like a good last run before Jersey 3*. The 2* for Simon will be a good test but I think he's plenty ready.

The other courses looked good from afar. I'll walk them close tomorrow.

We start tomorrow with the advanced then 2*...on to prelim, training dressage and show jumping.

The photo caption reads something along the lines of.."the sparrows were terrified when Bacon hit his top gear in pursuit...he's now resting on laurels." Unfortunately I think the sparrows won. Nolan is simply resting as she does.