I love this photo which showed up on Jessica Halliday's facebook today. It was taken yesterday during XC of Running Order...what an awesome horse! 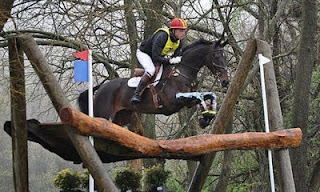 Today was quite the contrast to yesterday. The sun broke through the clouds and it actually warmed up! The mud began to dry, not to say that it wasn't still omnipresent.

Simon was first out of the barn. The CIC jogs started at 8 am. Simon was excited as usual about life. Of all the horses we have at the moment he might have the best life, never a dull moment and always happy, nearly gitty. We were able to get the shoe tightened on last night and it seemed to do the trick. He looked great!

We then went straight to the advanced show jumping. As mentioned last night RO was heading into SJ in the lead but without a rail in hand. We had a rail to 4th, so not much room to spare. I was able to watch a bunch round before I had to get on to start to warming up. There were a few fences causing a majority of the problems. RO is quite spooky so I made a point to give him the tour around the ring prior to starting.

He warmed up great and I headed down to the ring to watch 2nd and 3rd places go. Not that you wish bad on them, but it's always comforting to have a rail in hand. This ended up not being the case. Jennie who was in 2nd jumped a great clear to put the pressure on. RO jumped well in the ring. I had a lucky rub at the skinny, but better lucky then good :). He finished clear without time and won the division! After studying the video there are still a few aspects that need to be improved, but overall I was very happy. This was his 2nd advanced win, and a great set up for Jersey CCI*** in 3 weeks.


Simon was next in the Show Jumping. Entered Sunday in 11th place. I was very happy with him yesterday and expected a typically valiant effort on his part. He was delivering just that, in warm-up. What I didn't expect was a missing shoe! Sure enough that RF that made it through all of the mud and galloping yesterday didn't make it through the warm-up. Losing the shoe set off a frantic search for the farrier to get it tacked back on before the division finished. We made it just in time. He jumped very very well finishing without adding anything to his overnight total. He moved up a remarkable 5 spots to 6th! I couldn't be happier for him. He's such a genuine horse. FHI also has finished off his qualifications for Jersey CCI**. So you'll be seeing him in a few weeks time at Jersey!

Next up was Socks, back out on XC. I was able to get out to walk the course, and as you'd expect the mud didn't disappear as quickly as the sun had arrived. It was still heavy going, but the crew had done a great job to try to keep the upper hand by adding gravel on the take off and landings of most jumps. Socks warmed up very well and continued that trend out on course. This is his third training and he really seems to be catching on quickly! He jumped around clean and finished in 5th place. His efforts have earned him the second video of the night:

We finished off the day with Beau's SJ. He jumped very well also finishing with a clean round inside the time. He moved up to 4th. Not a bad finish to say the least!

Overall it was a great weekend bar the mud. I'm off to Kentucky on Wednesday for a busy week at Rolex. Keep in touch...it's going to be exciting!