Our European trip 2018 is a wrap. Jess, Hudson and I returned home to Aiken yesterday. Courtney is heading to pick up Quantum from quarantine tomorrow and return south with both he and Flynn.

I've been lucky enough to have been given the opportunity to train and ride some incredible creatures in the past. The current batch is no exception. This was my third trip overseas and with each time, a tremendous amount is learned, which directly benefited not only the horses that came along with us but all at home.

Flynn and Quantum's flights were scheduled for the Thursday prior to Boekelo. We actually headed north a few days earlier with the jumpers to compete at the Princeton Young Jumper Championships. We figured we might as well kill two birds with one stone!

While Courtney, Quantum and Flynn headed across the pond, Quincy (Quintessence owned by Jane Dudinsky) pictured below, finished an incredible week winning the $35,000 7-Year-Old Young Jumper title, being the only horse to finish all three days on zero faults. Quincy was originally bought as a 4 year old to event and was very successful, finishing his last event in 3rd at the Fork Horse Trials in the preliminary before focusing on jumpers exclusively. Even more incredible is that he finished up 2017 with the win in the YJC 6 year old Jumper Finals title in Kentucky. I can't wait to see what is in store for his future.


Following Quincy's class we stuck around to help Mary Guynn and Konner in the $5,000 Jr/Am Classic. They obviously didn't want to be left out of the festivities and went on to win their class as well!

Soon after, Jess, Hudson and I hopped on a plane and headed across the pond. Upon our arrival in Europe, I didn't know exactly what to expect in terms of potential results as we brought two extremely talented horses, both on track to make it to the top of the sport. The Boekelo CCIO*** Nations Cup was our first stop for Flynn (aka Getaway owned by Lisa and Bob Wall). Baby Quantum (aka Quantum Leap owned in partnership with Susan and Dave Drillock) traveled with Flynn to Boekelo. It was convenient timing that the 7-Year-Old FEI World Breeding Championships held at Mondial Du Lion were the following week. This gave Quantum time to get accustomed to the manic atmosphere that surrounds European fall championships.

To give both of these competitions context, I’ve ridden at the Royal Winter Fair in Toronto, Central Park NYC, Wellington and Devon, PA, all for eventing derbies as well as every east coast CCI, Blenheim in the UK, and Saumur, France. None would come close to the stage set for these horses. To say it’s electric is an understatement.

I've always found that the biggest limiting factor to performance is tension introduced by a charged environment. If the horses are relaxed you have a great chance to show off what they are capable of doing at home. Flynn makes a place like this a particular challenge - he would survive in the wild without a problem! He might have the most elevated flight response out of any horse we’ve had to date. He has continued to make great steps forward in being able to remain grounded in charged venues. Luckily our experience in dressage was a continuation for sure. There were a few times that he would start to worry, but did manage to settle back again quickly. This experience will help him in the coming years without a doubt. We finished on a respectable 32, with the potential to knock a significant number off in the future.

The cross country at Boekelo is a combination of a college football tailgate, steeplechase and event wrapped up in one. The crowd estimates topped 60,000 for Saturday with beer tents strategically positioned at every combination of jumps. This was the first time Flynn would have ever seen anything like it. He responded like a pro, aside from the very first complex which had a bar on the fence, he could have cared less. I've been working very hard over the past couple of years to become more efficient on cross country in order to be consistently closer to the time and save my horses to have gas left in the tank. Flynn couldn't have been much better. He made easy work of a difficult course. We were up on the clock until the last minute where he over-jumped a brush into a turning combination. I had to make a quick S-turn and lost a few seconds. He finished up just a few seconds over in great form. 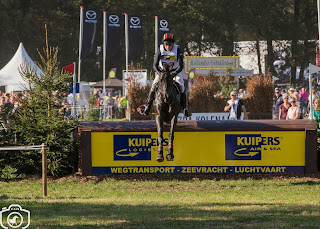 To put it mildly, show jumping was challenging. I can count on one hand to date the rounds that he's been anything but double clear including his first CCI*** at Bromont. He warmed up well, but I was unable to replicate that in the arena. He jumped in great form but finished up with 5 down. Obviously this was disappointing but we did come away with a number of things learned that will be implemented in the future.


After finishing up at Boekelo Courtney and Quantum started their journey on to France while Flynn hitched a ride with Horseflight back to the States. Meanwhile, Lisa, Bob, Catherine, Jess, Hudson and I spent the evening in Amsterdam. We are very lucky to have such a great support system, and it was great that Lisa and Bob could join and enjoy/partake in the experience.

We caught up with Courtney and Quantum in France on Tuesday. Our resident groupie, Catherine, continued her European trip with us and we were also joined by my parents as well as Ali and Alan, our French family, and Didi and Robert Callahan, who bred Quantum.

Quantum has been with us since we bought him as a weanling. We picked him up following the Fair Hill International 6 years ago. For a bit of background I've included a couple of videos below. We started him the end of his 3 year old year and he has continued on with the tremendous support of Susan and Dave Drillock.

He finished the USEA Young Event Horse finals in 6th place 2 years ago. This made him eligible for the Turner-Holekamp travel grant as a 7 year old. Before getting the nod, Quantum finished 2nd at his first CCI** this spring in Ocala and finished 2nd at both Millbrook and Stableview horse trials leading up to this trip. He was the highest placed 5 year old and as a 7 year old qualified and was ready to go!

Quantum could best be described as a 12-year-old boy that just finished a growth spurt. For the first time in his recent career he managed to break 30 at Millbrook. He is a very powerful and extravagant mover, that is when he can manage to remain balanced. He was able to do so at points through our test, but unfortunately not for its entirety. He finished the first phase on a 36 and I'd be lying if I told you I wasn't disappointed. That said this is certainly not a dressage show! Didi also pointed out that roughly 40 percent of the horses at WEG this past year had run at this exact show. Their future success was not correlated to their here results at all.

Quantum could best be described as a 12 year old boy that just finished a growth spirt. For the first time in his recent career he managed to break 30 at Millbrook. He is a very powerful and extravagant mover, that is when he can manage to remain balanced. He was able to do so at point through our test, but unfortunately not for it's entirety. He finished the first phase on a 36, I'd be lying if I told you I wasn't disappointed. That said this is certainly not a dressage show! Didi also had ready that roughly 40 percent of the horses at WEG this past year had ran at this exact show. Their future success was not correlated to their results at all.

Cross country was just as it should be, a true test of horse and rider. In true French form, it is a work of art. Click over to our Facebook page for more pictures, but each jump was more beautiful than the next.

Quantum far exceeded my expectations, he finished up with plenty left in the tank clear and under the time. He made easy work of the most challenging complexes. He is a true 4* horse in the making, and after finishing I'm confident it's not going to take too long to get there! Again we were presented with massive crowds, more of the wine and cheese family types when compared to Boekelo's college tailgate. A competition like this will make help create a strong foundation of experiences that will no double benefit him in the future. I only wish I could press fast forward!


Show jumping, very much like Boekelo was standing room only. Quantum handled the atmosphere very well, and without my mistake he should have finished on his dressage score. I rode into the triple a bit too aggressive and finished up with 8 faults. Impressively Quantum still managed to move up 30+ places from his dressage.

Of course I wish both competitions could have finished better on paper, but we learned a tremendous amount that will no doubt set us up better for the future. We will be back, without a doubt. Unfortunately I think this means bootcamp for the horses at home. We still have one more CCI*/** before our year finishes up and I fully intend to apply what I  learned in Europe there and beyond. 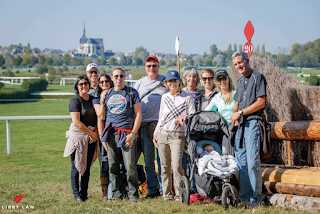 I also have to thank the USET Foundation, Jacqueline Mars, the US Eventing Association and of course the crew that came along to support us. This great photo by Libby Law was from Le Lion from left to right we have Catherine, Ali & Alan, my Dad & Mom, Did, Courtney, Hudson, Jess and Robert. Missing of course is Lisa and Bob from our crew in Holland Holland.

From here we have one more week with the jumpers, and Cascor in the CCI* and Starr Witness in the CCI** at the Ocala Jockey Club at the end of November.

Make sure to get your signed copy of the Riding Horse Repair Manual at the DPE Store by clicking here! 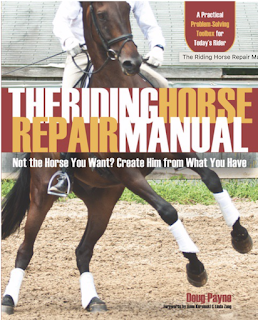 Posted by DPEquestrian at 5:42 PM