DPE's summer season is in full swing. We've had a crazy few weeks. Following the cancellation of Stuart horse trials, we rerouted a bunch of them to NJ horse trials as our final prep before Millbrook.

Most notable and best performer of the two weeks was the Ross' Crown Talisman. Tali jumped around a great, conservative round at NJ and finished off with a great 9th place effort as his first advanced. Below is a full listing of results. It's an incredible group of horses, every horse entered in at both events finished in the top 10 of their division! 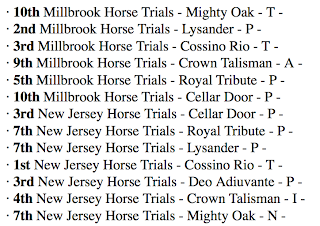 The other stand out at Millbrook was Royal Tribute's 15.2. Tribute is owned by Kristen Burgers, Larry and Amelia Ross and Doug. He's still ramping up to full competitive form, but this was one excellent way to kick it off!

Tali's XC and Show Jumping from Millbrook is found below, awesome especially considering this was his first advanced!

Aside from compeition we also have some very exciting news that Virtus-DPE has, with the tremendous help of the USEF Event Owner's Taskforce, has purchased a fabulous 5 yr old gelding. Below is a video of Lisnahall Imperier known around the barn as Rex. The following video was shot yesterday at the Ridge's schooling show. We're in the process of syndicate formation and will be up and running within the next few weeks. I can't thank the task force enough for their assistance, he wouldn't be here without them.

Rex is slated to compete this coming weekend at Waredaca in the YEH-5 qualifier, so check back for more details and results. He's certainly going to grab some attention!